Skip to content
R.J.O. Wellness Coaching & Academy > Blog > Wellness > How The Pandemic Has Effected Alcohol Consumption & What Are The Risks? 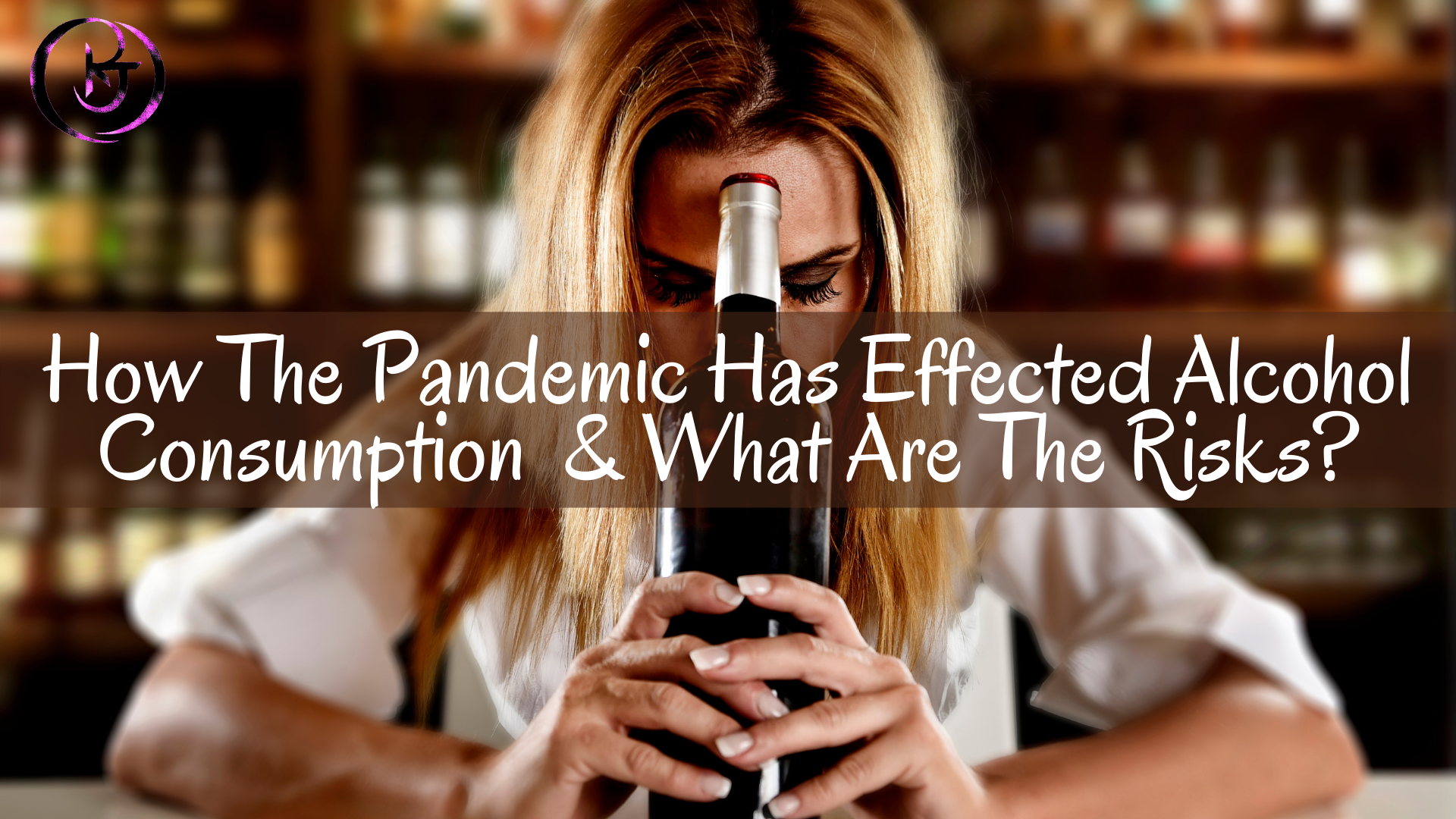 In this blog, you will learn a little about alcohol. You might be thinking, great, “I love my wine.” Of course, as we all know a little alcohol won’t cause adverse effects but how has the COVID-19 pandemic effected alcohol consumption and what are the risks.

Disclaimer: Please note that by posting and discussing this content I do not endorse drinking alcohol or any specific company.

The History Of Alcohol.

For thousands of years fermented grain, fruit and honey have been used to make alcohol, also known as ethyl alcohol or ethanol. It has been shown that fermented beverages were present in ancient  Egyptian civilizations, in China around 7000 BC and in India around 2000 to 3000 BC. Babylonians worshipped a wine Goddess s early as 2700 BC and in Greece mead, made from honey and water, become one of the most popular fermented drinks.  In pre-Columbian times many native America cultures were know to have developed alcoholic beverages and in South America a fermented drink called chicha, made from grapes, corn or apples was consumed.

In the sixteenth century alcohol, or spirits, was used more for medicinal purposes until the 18th century when the British government passed a law encouraging the use of grains for distilling spirits. This then sparked an increase of alcohol in the market and more recreational use became widespread.

The nineteenth century brought about a changes in the attitude towards alcohol and encouraged the moderation of it’s use and the push for prohibition. In the 1930’s the illegal trade of alcohol boomed, as a result of the 1920’s law prohibiting the manufacturing, sale, import and export of intoxicating liquors, so this prohibition was cancelled. Alcohol, in moderation was again legalized for consumption as we know it today.

Unfortunately, many people don’t drink alcohol because they enjoy the great taste.  Alcohol consumption is a common coping response to stress. Historically, in developed western countries it has been shown to increase following catastrophic events, such as terrorist attacks, large-scale natural disasters and now the COVID-19 pandemic, is longer lasting and more extensive than previous traumatic events.

The pandemic has caused widespread social disruption and isolation, limited social support and access to medical care, and negative domestic and global economic impacts, therefore, experts suspect the pandemic could have an even greater effect on population-wide alcohol use.

Effects of Alcohol on Health

The Mayo Clinic and other health organizations suggest that moderate use of alcohol is safe for the most part safe but for some people it is best to refrain from drinking all together, such as pregnant women. However, studies show there may be some health related benefits from consuming small amounts of alcohol such as wine. The results of these studies are not certain and do not provide enough reason to start consuming alcohol if you aren’t already.

Some of the possible benefits of alcohol include:

The guidelines for safe consumption of alcohol are:

Examples of one drink include:

Although The Mayo Clinic recognizes there may be some health benefits with low to moderate alcohol consumption they so suggest that excessive drinking can increase your risk of serious health problems.

I personally have never been much of a drinker. I have never really been able to processes it very well. Don’t get me wrong, I’ve had my share of fun nights out that were followed by me swearing I would never drink again. Which were then sometimes followed by me drinking again the next day; apparently not having learned my lesson.  But for the most port, did’t really drink much because I always just ended up feeling bloated and gross when I drank too much.

However, then the pandemic hit, my friends and I suddenly found ourselves off work with more time on our hands than we have had since childhood. So, we began to hang out more often and drink. I was soon finding myself pouring a glass of wine at three o’clock in the afternoon, which is completely out of character. When speaking to friends and colleagues, I found out that I wasn’t the only one doing this. It seemed many people had turned to ranking either out of boredom or as a way to cope with the stress of the pandemic and the restrictions that have been placed on us.

Not too long ago I heard an ad on the radio encouraging people to take a “dry” day; one day a week without alcohol. I found this quite astonishing to hear as from the way they were making it sound, drinking alcohol was now the norm and may be getting out of hand. But they were right, alcohol consumption is getting out of hand for most people. There are even memes online going around saying poking fun at the prospect of what the generation would look like considering these kids were being raised by a bunch of day drinkers. Although at face value a person can see the humour in that but when you really think about it a generation of alcoholics is not a laughing matter.

I started to do some research on how the pandemic has effected alcohol  consumption and found some interesting articles, some of which I will post in the show notes page for this podcast episode. One article stressed that public health messages should include education about managing stress and anxiety without using alcohol, drinking within safe limits during physical distancing and social isolation, and knowing when an individual ought to be concerned about themselves or someone else.

The article also called for greater efforts to screen for alcohol use disorders during primary care visits and to provide treatments for individuals at risk for relapse or exacerbation of heavy drinking.

Telehealth services that use mobile and online programs may help provide access to such care.

Ensuring adequate insurance for treatment will be essential with the added concern that many individuals have lost their employer-based health insurance and may have reduced access to health care and addiction treatment programs.

The experts noted in the article stated that unfortunately the full impact of the COVID-19 pandemic on alcohol use is not yet known, but rising rates of consumption during the first few months of the pandemic point to the urgent need for effective public health and medical responses.

Alcohol crafting and consumption has a long history but there are many reason to cut back on alcohol consumption. Although alcohol is socially accepted, and almost the norm in current pandemic times,  there are many negative side effects that come along with drinking too much alcohol.

Although organizations, such as The Mayo Clinic, agree that drinking alcohol in moderation may be safe, and in some cases may even provide some health benefits, after researching the effects of alcohol consumption the research also shows that there are numerous benefits that will come from reducing, or eliminating, alcohol consumption.

Let’s look at some troubling statistics of alcohol consumption:

The Foundation For A Drug-Free World reports that over 15 million Americans suffer from alcoholism and over 40% of all car accident related deaths involve alcohol. For this reason alone alcohol awareness and modification is something that needs to be at the forefront of our values as a society.

Vegan.com references other statistics such as in the USA alone, alcohol kills 88,000 people annually. Most of these deaths (nearly 20,000 Americans) die each year from alcohol-related liver disease, and more than 10,000 are killed in drinking-related automobile accidents. About 1.3 million Americans each year receive treatment or go to rehab for Alcohol Use Disorder and in 2016, more Canadians were hospitalized due to alcohol than heart attacks.

According to the World Health Organization in 2012 about 3.3 million deaths, or 5.9% of all global deaths, were attributable to alcohol consumption. These numbers are quite appalling.

Drinkaware, an organization in the UK who’s main goal is to help reduce alcohol-related harm by helping people make better choices about their drinking, mentions a variety of benefits that come from reducing alcohol consumption.

As you can see there are many benefits to reducing consumption of alcohol that may cause you to pause next time you reach for that drink on a random Tuesday afternoon.

I encourage you to seek the help of a trained professional if you feel you have problems with alcohol and want help reducing or eliminating it’s consumption.

Now, I want to move on to a different topic when it comes to alcohol and that is to answer the question, I often get as vegan educator, and that is … “is alcohol vegan”? The answer, you would think would be a simple… “yes!”

To be able to better answer this question, I dug into the research to find out as much as I could about the crafting of alcoholic beverages and if alcohol is vegan friendly or not. Unfortunately, although you might think all alcohol is vegan, considering it’s made out of fruit or other plants, there are a some wine, beer and liquors that are processed with the use of animal products.

Beer and wine can be processed using animal products such as isinglass, egg whites, or gelatin. Unfortunately these ingredients are not listed on the label because alcohol is commonly exempt from the labeling requirements of other food products. Barnivore, a vegan beer, wine and liquor directory, does a great job of maintaining a current and comprehensive list of vegan alcoholic beverages.

Almost every brand of hard liquor, such as bourbon, whiskey, vodka, gin, and rum, is vegan and nearly all distilled spirits are vegan, except for cream-based liqueurs, which contain dairy and products that list, or are made from, honey such as mead.

According to Barnivore, brewmasters, winemakers, and distillers may include animal ingredients in their products directly, or they might use them to process and filter. When making the product, dairy, honey, and other things are usually listed on the ingredient list. However, when filtering the drinks prior to bottling, companies can use things like isinglass (from fish bladder), gelatine, egg whites, and sea shells are not listed on the final ingredient list.

Therefore, if you are concerned that the processing of your alcoholic beverage may have used, or, exploited, animals in any way it’s best to check, this list, or an extensive directory before consuming it.

Many wines are vegan but, for an extensive list or wines worldwide, please visit a directory such as Barnivore or PETA, which again I will post a list of vegan wines and directory link on the show notes page.

To get you started, PETA lists the following wine brands as vegan friendly:

A wide variety of liquors are vegan unless stated on the bottle such as those made with honey or cream. For an extensive list of vegan liquors you can visit Urban Tastebud, which I will post on the show notes page. According to vegan.com, these liquors (short list) are typically vegan:

So, there you have it! Alcohol is a social drink enjoyed by many around the world and has an extensive history. It has been shown to have some positive benefits in moderate amounts but also many grave negative side effects and consequences when abused.

Therefore, reducing or eliminating, consumption and educating yourself about the risks of alcohol is essential to ensure your health and safety.

As well, if you are vegan, and committed to showing compassion to animals, it is important to be aware of the alcohol you are choosing. Luckily, there are databases, such as Barnivore, that contain vast amounts of information to ensure we, as vegans, don’t spend our money and support companies that use and exploit animals to make alcoholic beverages.

Remember, that by posting this content I do not endorse drinking alcohol or any specific company. This information is for entertainment purposes only. I encourage you to please drink responsibly and ethically.

To listen to the audio podcast version of this blog CLICK HERE.

Until next time my friends